A quick reference to all widget types in Video Insights

Video Insights is helping you to speed up your traffic analysis thanks to various object properties collected during the video processing (more described in this article). Based on these properties, we defined a set of metrics and their outcomes are presented to you in a form of a Widget. This article will provide you a quick reference to all widget types available in the Video Insights application including usage examples. 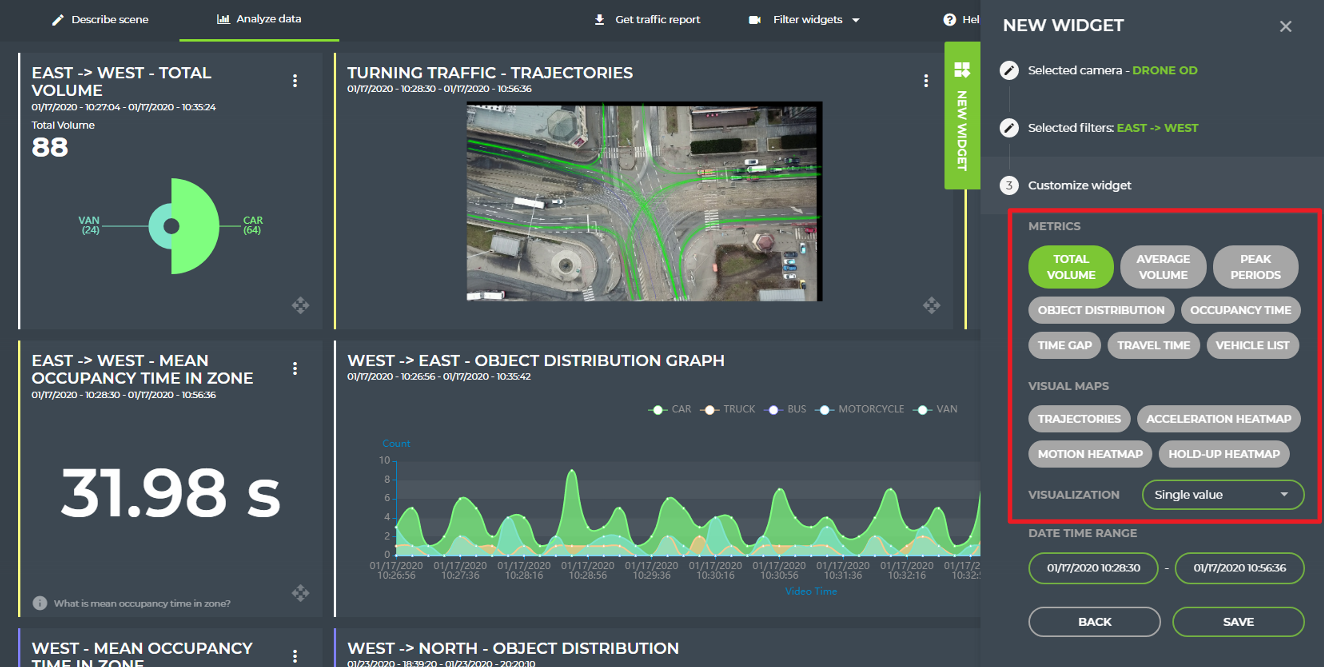 Total volume represents the number of all traffic objects that fulfill the selected filter (movement, event or scenario) in the selected date time range. It can be displayed as one total number or as a pie-graph with counts for a particular object class. Total volume can be computed for all filter types and their combinations.

Total volume widget presented as one number / a pie graph

Average number of vehicles that meet a defined filter (movement, stay in a zone etc.) for a certain period of time. The granularity can be set from 1 second to 24 hours. Visualization of the data is either a total count or a pie graph for the particular vehicle types. Average volume is computed as total volume divided by the specified time unit.

Average volume widget presented as one number / a pie graph

Time periods with heaviest traffic identified during the video footage. Peaks can be shown for one selected filter or for all objects on the scene, however, they are not available for more than one filter (e.g. 2 for movements at once).

Peak interval is normally one hour long and is floating. Therefore, this metric does not have much sense for videos shorter than 1 hour by which actually the same results as by the total volume are reported. If the videos are longer than 24 hours, the peak periods are reported for each day (or part of the day which the video includes).

Example:
Imagine a 12 hours long traffic video lasting from 6AM to 6PM for which you would like to see the peaks. The Peak hour widget would show you that e.g. heaviest traffic in your analyzed material was between 11:15 - 12:15 (floating hour) whereas the AM, PM peaks widget would indicate that the AM peak hour is 11-12 o'clock and the PM peak 4-5 o'clock.

Object distribution graph shows the number and type of all traffic objects present in the specified zone/movement during a specified time. The granularity can be set from 1 second to 24 hours, and the graph can be generated as a line graph, bar graph or a heatmap.

Example: You already know what was the total number of vehicles in your 5 hours long scene, but you want to see the distribution of the objects e.g. in 15 minutes long intervals. By doing that, you might find out that, for example, the traffic was the heaviest in the first 30 minutes of the footage.

Average time that the filtered traffic objects spent inside a selected zone. It can be within a stay event or for a movement crossing a zone. When created for a movement, all objects crossing the zone are counted regardless of their direction. If a movement goes through a zone and a line, mean occupancy time is computed only for the zone.


Mean occupancy time is a good indicator about the density of the traffic in the desired area. If your interest lies more on the time spent crossing the zone, it is advisable to use another metric - travel time (see below).

Examples: Average time vehicles are staying in a short-time parking place or occupying a crossroad entrance, average time spent on a roundabout etc. 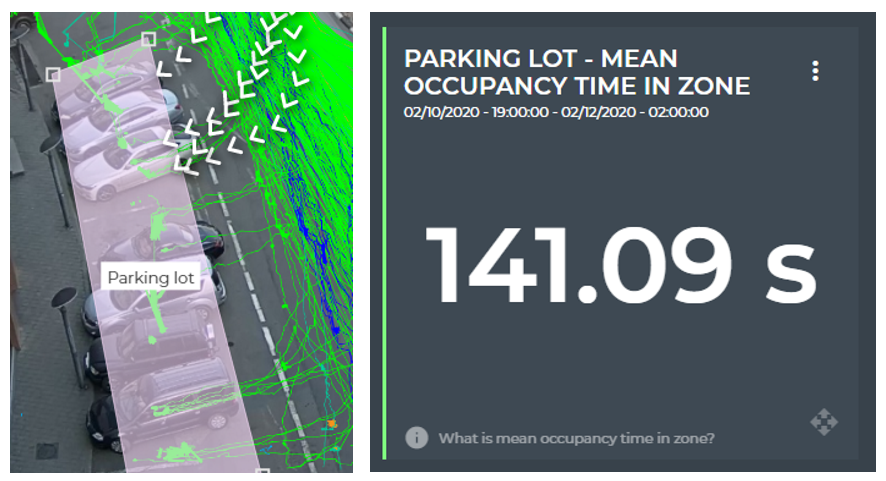 Average time that the analyzed traffic objects spent within specific space boundaries. Unlike the Occupancy time, Travel time can be generated not just for a zone but as well for a movement composed of crossing over two lines or zones (see images below). This metric is used to analyze traffic fluency. It can be shown as a single number or a bar graph based on a specified time unit.
For calculation of travel time, exact entry and exit point has to be in place and the vehicle trajectory has to be uninterrupted. There are several possibilities for analyzing travel time:

Time which the object has spent within the zone, from entering until leaving the zone

Time which the object has spent between entering the first zone and leaving the last zone, whatever the trajectory between them was

Time which the object has spent between crossing the first and the last line, whatever the trajectory between them was

Line to Zone/Zone to Line

Accordingly to previous situations, travel time here is the time which objects spent between crossing the first line and leaving the last zone or vice versa.

Examples: Mean travel time brings answers to questions like: How much time in average do the vehicles need to go from a defined point or zone A to point B? How long does it take to cross the bridge for cars, buses, bicycles and how long for pedestrians? What is the mean time the drivers need to make a turn on a crossroad? How much time do they need on various parts of the day?

Time gap is the time duration between two consecutive traffic objects that appeared on the same spot, crossed the same line etc. The shorter the time gap, the higher the frequency of the traffic in the analyzed spot. Time gaps are applicable for one movement at a time and it is advisable to use it for a single line or zone, as only the first detection spot is taken into account (i.e. when a movement goes through several zones or lines, only the first one is taken for the time gap computation).

Time difference between the car A and the car B entering the defined zone 1. The zone 2 is ignored for the time gap

The widget in Video Insights shows the mean time gap either as a single value or as a bar graph for a given time unit. If you are interested in all individual vehicle time gaps, they are available in our .xls reports or you can create the Vehicle list widget for that.

Examples: How busy is a street in the morning, around noon and in the evening? What is the average timegap of the vehicles in and out of the rush hour? Do the drivers respect a safe distance in front of a dangerous place on the road?

Advice: Timegap in a zone or on a line is calculated based on an object crossing in any direction. If you' re analyzing timegaps, be careful where you place the zone or line and check that it corresponds with the desired direction of the trajectories.

List of all traffic objects detected in the selected spot/area during the desired time frame together with their exact entry times (when a vehicle crossed a defined line or entered a defined zone). The Vehicle list widget might be a bit impractical for a large sets of data. Complete data are available in the Vehicle list report.

Examples: What was the sequence of vehicles on an analyzed spot during 1 hour of the footage? At what time has a car, motorbike or a van entered a pedestrian zone?

List of all vehicles following a given movement, their object classes and the exact entry times

Note: When the Vehicle list widget is used for a zone, each contact of an object with the zone is counted as new. That's why the result for total count might slightly differ from the Total volume number.