Applying Smart Corridor to boost the accuracy of traffic counts

The Smart corridor is a great feature developed especially for traffic counters. It improves the accuracy of object volumes on longer movements thanks to its capability to re-connect some possibly interrupted trajectories of that movement. Trajectories passing through the major part of the movement length are now counted into the Smart Corridor and thus the counts are closer to reality.

Under ideal scene conditions - if all traffic objects were fully visible without any obstacle for the whole time on the scene - this feature would not be necessary at all. But on lots of scenes processed by GoodVision, we encounter different imperfections which cause vehicle trajectories to be disconnected for some reason. Be it a low camera placement where bigger traffic objects on the scene or closer to the camera are covering the smaller or more distant ones, minor obstacles in the camera view like signs, posts, billboards, trees etc. or the low video quality itself (darkness, resolution, FPS or else).

The Smart corridor was designed to fix the broken tracks as long as they follow the chosen movement stream for the majority of its distance. So in case of a short disturbance on the way, causing a break in the trajectory path, the Smart corridor deals with it and counts the object into the chosen movement. As a final result, the total volume counts are optimized. The smart corridor is meant to be applied to gain the most accurate traffic counts on every scene. 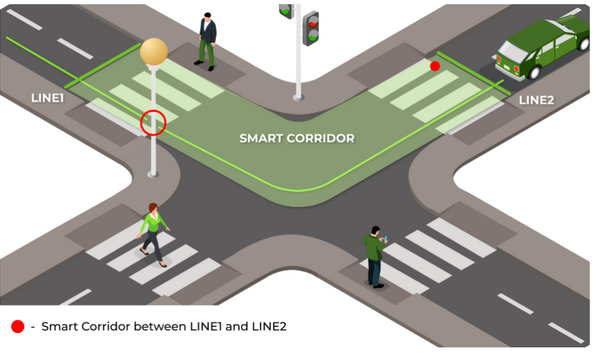 It is also a great tool to verify the correctness of your line placement. When putting the filters on the scene, there are some basic rules to follow and some tips for an advanced analysis. The Smart corridor will show the area of the chosen movement for which it collects the fragmented trajectories and if they fulfil the major path of the stream, they are included into the total volume for that movement. You can thus check whether the defined movement includes all necessary trajectories that might get broken on the way. 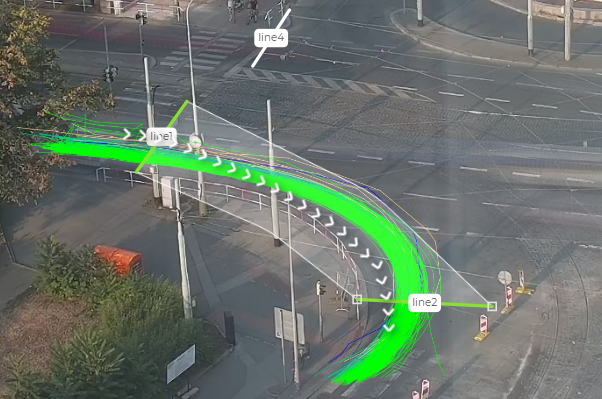 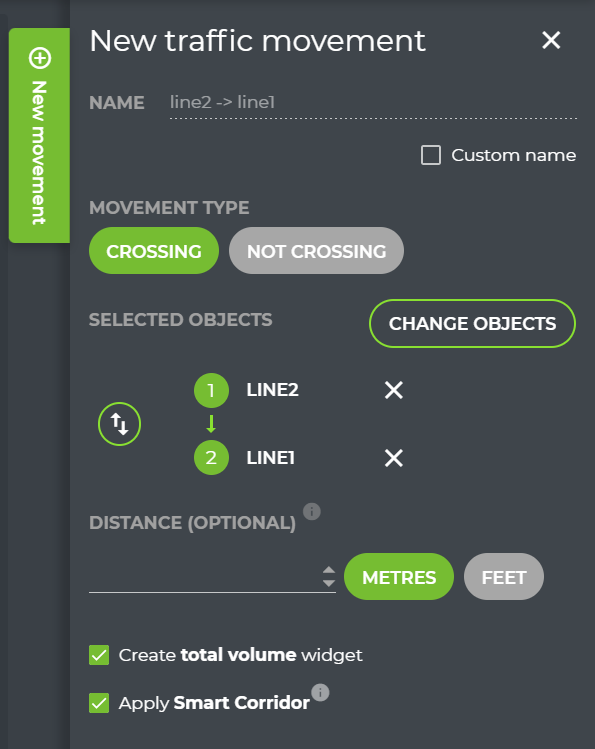 Picture 3: Creating a Smart corridor movement from a filter on the Describe page

Movements with applied corridor count are marked with the corridor icon in front of the filter name on the movement bean: 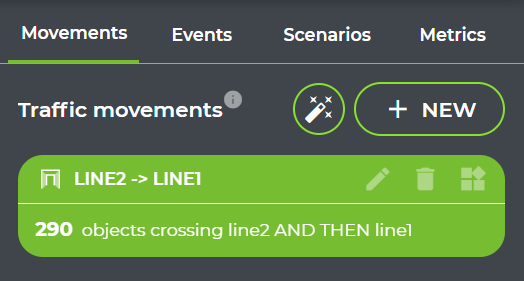 As with every special counting feature, the Smart corridor has some limitations for its usage:

Apart from the corridor area visible on the Describe page of your analysis that can lead you to verify the movement shape, the main purpose of the Smart corridor is to increase the data accuracy. It will bring the most when used on long direct movements or places with some unusual conditions like congestions, obstacles, distant areas further away from the camera, shadows etc. When the line filters are placed correctly, even turning movements can be covered properly.

For example in the following scene, it is clear that when analyzing the bus turning movement, it is more suitable to use shorter lines heading more towards each other than to use one general line for all movements from a given direction. Check out the tips for proper line placement to get a better understanding of the scene description. Anyhow, the visible corridor shape is quite self-explaining.

The corridor count will be automatically applied for the movements created with the Smart corridor feature. You will see the results boosted by the corridor in the respective total volume widgets, object distribution graphs and traffic reports. You can also see the whole set of trajectory data included in your movement by creating a trajectory widget for the corridor movement.