All Collections
Practical Tips for Analysis
How to Calculate Saturation Flows

How to Calculate Saturation Flows

Getting saturation flows automatically on every traffic scene

Saturation flow is a key measurement of on-street performance. It is an expression of the maximum capacity of a link as predominantly determined by junction characteristics like layout, turning radii, visibility, as well as vehicle composition. Saturation flow report describes the number of passenger car units (PCU) in a dense flow of traffic for a specific intersection capacity and time of the traffic signals. Saturation flows are usually required on each individual lane when modelling signalised intersections or roundabouts.

How does GoodVision calculate saturation flows

GoodVision’s algorithm detects free-flow conditions automatically within the desired time interval and uses them for the calculation. The algorithm is based on precise measurement of time-gaps between vehicles as they discharge into the intersection or a corridor across the stop-line. Computation includes also the traffic volume and PCU parameters (passenger car units).

Example of a drone scene description for saturation flow calculation

It is advisable to use a drone video footage for saturation flow calculation as from the top-down view, separate lanes can be identified easily. But also on some traffic scenes from standard fixed cameras it is possible, although maybe not for all lanes separately due to the lower camera angle.

For example, on the following picture the entries from the direction north and west are defined separately whereas the east entry will be calculated for both lanes of the traffic stream

How to get saturation flows step by step

Saturation flow report can be created in the report builder accessible on the Analyze screen in GoodVision Video Insights.

Created saturation flow reports will appear on the Traffic Exports page of your camera in a few minutes. Individual saturation flow Excel sheets are created for each traffic movement. This report saves you a substantial amount of time and manual video review. 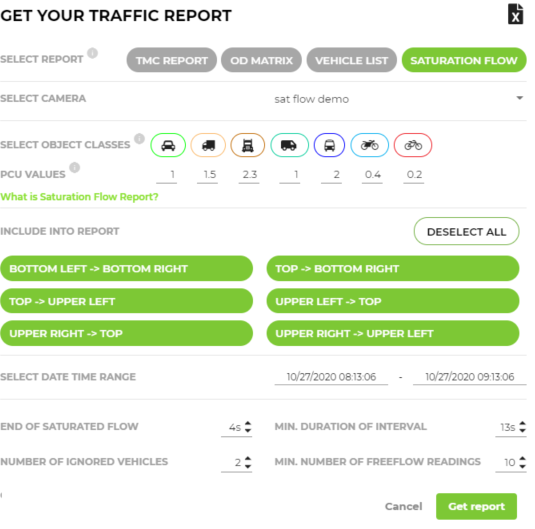 The algorithm is configured to TfL guidelines for the United Kingdom, but you can easily adjust the following parameters.

Read more about saturation flow report
Did this answer your question?